On Saturday September 5 2015, partners from throughout the European Cultural Learning Network and beyond gathered at Bernie Grant Arts Centre for a glorious coming together of everything Collage Arts has been working towards for the past 30 years. The event involved apprentices and staff both current and former, Chocolate Factory artists, and a mind boggling variety of musicians, filmmakers, and clowns, to name but a few. 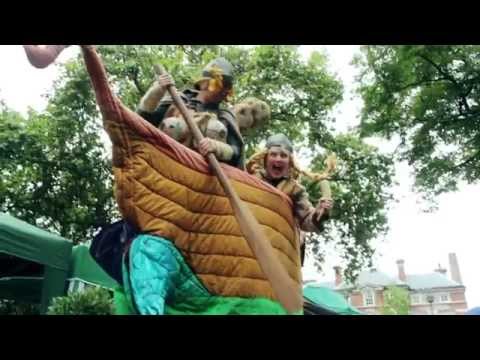 As we kicked off with the conference to launch a new accreditation for practitioners of non-formal arts education, it was enlightening to hear about all the great work going on across Europe to make these necessary changes happen and keep arts on the agenda. It also came with some surprising revelations, such as the fact that there are more people working in the creative and cultural sector across the continent than there are in Europe’s entire automotive industries!

Suddenly there was a dramatic change in tempo, and decibels, as the delegates were lead out of the conference by a host of drummers from the Dhol Foundation, creating a fantastic and inescapable noise, in to the courtyard, where the real celebration began. During the course of the day, we were treated to a range of musical delights, including future stars from the Indigo Sessions, such as the ever inventive HE IS A PEGASUS, and a blistering set from Xantoné Blacq and his band. Meanwhile, Vikings on stilts, courtesy of Circo Rum Ba Ba, marauded through the crowd, as artist Delphine Boghos painted on, capturing the day in a series of watercolours.  Joining them on the street were several other quirky and charming characters such as Storyteller Mike Dodwsorth, and Aunty Sarah with her Perambulator of Wonder, while Yana Stajno engaged visitors in creating a giant mural to commemorate the day and its aims.

In the auditorium, performances ran from daring aerial acrobatics, to moving, thought-provoking documentaries; the result of a Slovenian student project. Fresh from an impressive display in the courtyard, Bhangra experts in full traditional dress led participants in an energetic dance, with accompanying history lesson about Bhangra’s humble beginnings. Audience members also got involved in a spirited Bollywood dancing session, learning to pop shoulders like the best, and were privy to a commanding enactment of Yerma, by The Amina Khayyam Dance Company. Their interpretation of a play by the poet Lorca incorporated elements of ballet and flamenco into Amina’s neo-classical kathak style, and was all at once beautiful, harrowing, and engrossing. Rounding out the day’s dance performances with astounding finesse was a new composition by young choreographer Liam Francis, featuring music by Nicholas Hewlett. Breath-taking, utterly absorbing, and practically indescribable, there were times when Liam and partner Vivian’s movements seemed dangerously defiant of gravity, leaving the whole theatre visibly enraptured in the piece’s raw emotion.

As Taking Part came to a close with the sounds of pebble against pebble accompanying the final musical flourish of disparate artists joining together, the extent of what we all have to celebrate was abundantly clear, and so too was the sense of pride for what has been achieved. As for the crowd, they seemed eager for whatever we can dish up for them next, and ready to Take Part in another round of rejoicing in the wonder of the arts and arts learning.

Share this:
We use cookies on our website to give you the most relevant experience by remembering your preferences and repeat visits. By clicking “Accept All”, you consent to the use of ALL the cookies. However, you may visit "Cookie Settings" to provide a controlled consent.
Cookie SettingsAccept All
Manage consent